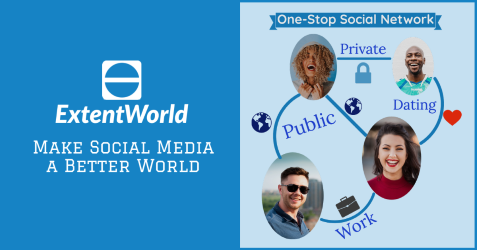 For social media users who are concerned about the lack of privacy they face with major platforms, ExtentWorld is a good option to try out. In 2020, the site was co-founded by Hang Dinh, who worked with three other senior software engineers, including her brother, to create a social media site that would allow users to keep their own data private and that would also solve additional problems found on sites like Facebook.

“We all graduated from the University of Connecticut with a PhD in computer science and engineering,” Hang says. “I myself am a tenured associate professor of computer and information sciences at Indiana University South Bend, so between the four of us, ExtentWorld has got a lot of technical expertise behind it. That knowledge has helped us fix the issues that so many people have found frustrating about other sites.”

ExtentWorld was created when Hang’s brother noticed how Facebook exploited users’ personal data through targeted ads. “This unethical use of data triggered two reactions in him,” Hang says. “First, he stopped using social media. He then had the idea of building a new social media platform that would not only protect its users’ private data but also reward them for their engagement since social media would be nothing without user contribution. The idea was to make it a one-stop social media platform. ExtentWorld was born.”

Initially, Hang was skeptical of her brother’s idea since even a standard social media platform would require at least thirty full-time developers. That did not even take into account all the additional great features that he had in mind.

Hang couldn’t shake the idea, however. “It stayed with me because I was teaching a course that discussed privacy policies of social media. Therefore, I was even more aware than the average social media user how far privacy concerns reach. I knew that Facebook tracks your internet browsing history. This completely changed my perspective, as like most people, I simply do not like to be spied on, and I knew my brother was on to something big.”

Hang’s brother, in the meantime, invented two code-generating tools. This enabled ExtentWorld to be developed by just three developers, and as the engineers worked on the new platform, Hang saw how it was different from sites like Facebook. She especially liked its end-to-end encrypted video calling. She could now connect with her family in Vietnam and Germany without concerns about privacy. “I was sold. Once we launched ExtentWorld in 2020, I finally took the big step and deleted my Facebook account.”

To help her brother’s product realize its full potential, she formed ExtentWorld LLC. “That was definitely a step outside of my comfort zone,” Hang remembers. “I read up on forming and running businesses so that I could step in and run the company while my brother focuses on programming and coding.”

ExtentWorld has many capabilities that differentiate it from other social media platforms. One is that a user has one account with up to eight different profiles: public, private, work, academic, dating, merchant, anonymous, and secret. ExtentWorld also provides a dating service with rules that are designed to maximize the user’s privacy.

Information on ExtentWorld is organized based on locations. Each location, such as a city or a country, has a forum where the users interested in that place can view and post. However, for a location at the national level, ExtentWorld restricts free posts to people with a high reputation score.

These features have led to more investors, who may purchase eShare, which is a pre-IPO ExtentWorld common share. ExtentWorld uses eCoin for all transactions within ExtentWorld; eCoin is virtual currency but not cryptocurrency.

Hang sees a big future for ExtentWorld. “I think the social media landscape will continue to be dominated by big players for a while, but we are gaining traction as more people who are tired of their privacy being violated find out about us. Users are becoming more aware of the issues with mainstream social media and are turning to use for the solution. We already have registered users from 25 countries.”

The most challenging task for ExtentWorld’s creators has been marketing. “We are academic and technical people – we can build a good product, but we are not natural marketers. We have had to learn everything about marketing from zero,” Hang states. “In Vietnamese, we have a saying: ‘Vạn sự khởi đầu nan,’ which means ‘All things are difficult before they are easy.’ Thankfully, because of what we have learned, marketing has been becoming easier.”

ExtentWorld continues to grow each day. “With each new user we get across the world, we celebrate,” Hang says. “It means one more person has found a way to use social media without paying the price of having their privacy violated.”