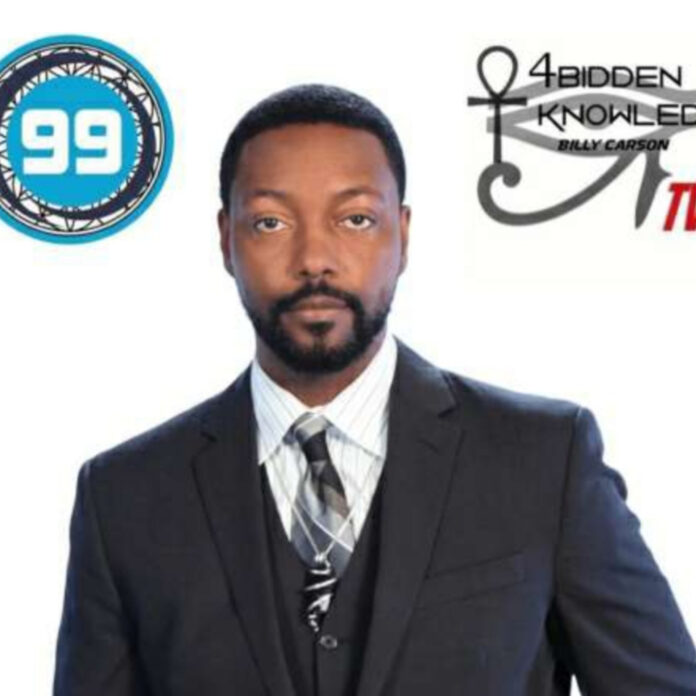 Growing up, Billy Carson was so poor that he put cardboard in his sneakers to keep his feet from touching the ground. “To say that I didn’t have money would be an understatement,” he says, “so I became an innovator at a very young age. It’s a mindset that I developed, and by the time I was in my teens, I was already an entrepreneur.” His first business in electronics would be the start of a long history of success in business and would ultimately lead to the debut of Mr. Carson’s online TV network, 4biddenknowledge TV, which explores Earth and the universe, bringing viewers exciting interviews with experts and film footage from around the world.

Many of the shows are hosted by Mr. Carson. “4biddenknowledge TV’s offerings are intriguing,” he says. “There’s something for everyone. One of my personal favorites is  Egyptian Mystery School, which discusses teachings in ancient wisdom and knowledge connected to our ancient ancestors. I also like Conscious Music, which is for all genres and moods and is entertainment for the entire family.” Viewers can also watch Hidden Inca Tours or The Hidden Elon Musk of Africa. The network’s diverse, thought-provoking topics have led to its growing popularity, and it can now be found online and on Apple TV, Roku, Amazon Fire TV, iOS, and Android.

The road to 4biddenknowledge started when Mr. Carson, who has a long, successful history of entrepreneurship, was very young. “You may not believe it, but I started writing book reports each week when I was only one year old. It’s true! This was because of my father, who instilled a hard work ethic in me. When I was twelve, my parents required me to pay rent to live in the family home. I was also required to use my own money to pay for most of my daily needs.”

While this would have had an adverse effect on most children, Mr. Carson says that it actually drove him. “I was pushed to become an innovative thinker and entrepreneur. Where I came from, everyone had holes in their sneakers because we couldn’t afford shoes. I would put cardboard in my shoes to keep my feet from touching the street. I had to wear pants that were too small because I outgrew them so fast. Eventually, I got more pants, but I still had only two pairs for the entire school week.

“Can you guess what I did? I bought the 79-cent pack of dye from the grocery store Winn-Dixie, and I bleached my pants and then dyed them overnight to a different color. The next day, I went to school wearing a different colored pair of pants. As far as everyone knew, I had at least three or four different colored pairs of pants every week. It was experiences like this that toughened me and gave me the mindset that I would provide for myself and solve my own problems.”

To provide for himself, Mr. Carson began selling newspaper subscriptions for the Miami News at the age of twelve and became the top newspaper subscription person. “I invested all of that money into electronics. At fourteen, I started an electronics company, and by fifteen, I was making more than my parents did. By sixteen, I had moved out of my parents’ house and had two cars and an apartment, and I still graduated from high school, all while running my own business.”

Since those early days, Mr. Carson’s accomplishments have grown. He is the best-selling author of The Compendium Of The Emerald Tablets and Woke Doesn’t Mean Broke, the new financial bible. He runs a multi-million dollar company that is dedicated to helping people around the world. Mr. Carson is a host on dozens of shows pertaining to science, astrophysics, and ancient civilizations. He is also an expert host on Deep Space, a new original streaming series by Gaia that explores the Secret Space Program, revealing extraordinary technologies and their potential origins. Additionally, he serves as an expert host on Gaia’s original series, Ancient Civilizations, in which a team of renowned scholars deciphers the riddles of our origins and pieces together our forgotten history documented in monuments and texts around the world.

Mr. Carson recently earned the Certificate of Science (with an emphasis on neuroscience) at M.I.T. He is also using his passion for knowledge as CEO of First Class Space Agency, which is involved in research and development of alternative propulsion systems and zero-point energy devices.

His talent for entrepreneurship extends to philanthropy. “I decided to raise money for the people that were victims of the freeze disaster in Texas. I used Instagram badges to raise money on IG Live talks. Instagram matched the badge donations, and then I doubled that amount. I took questions and answers for paid badges during IG Live, and that is how I raised the money. We ended up raising a total of $2,000.”

Mr. Carson knows he has a large platform that he can use to advance knowledge and help people. “While I have been enormously successful because of how hard I have worked, I believe in using that success for the betterment of society. That’s why I prioritize philanthropy, and it’s why I started 4biddenknowledge TV. There is a whole world out there that we need to know about, and I’m happy that with this platform, I can help more people access it.”