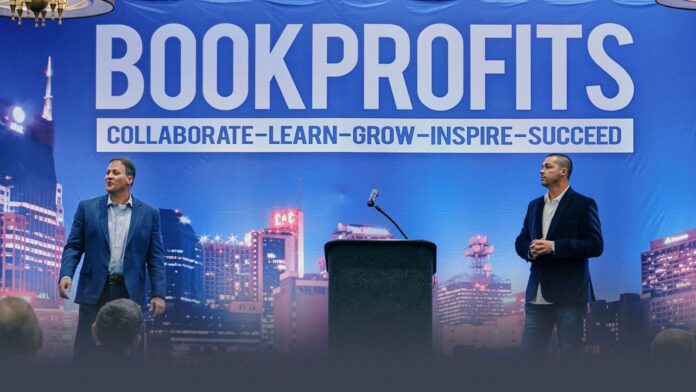 Book Profits, founded by Jon Shugart and Luke Sample, is the # 1 marketing system for buying and selling textbooks in 2021.  In this exclusive interview, the founders discuss the secret to success buying and selling on Amazon and how anyone can make money on the world’s largest online retailer.

Jon Shugart, CEO of Book Profits, obtained his Bachelor of Science in mathematics with honors from North Georgia College & University. Mr. Shugart received his Masters of Education Leadership from the University of Southern Mississippi. However, after teaching high school mathematics for four years, Mr. Shugart caught the technology bug and enrolled at the Georgia Institute of Technology to study Computer Science in the year 2000. It was that decision that has led him down the path he is currently on.

Over the past 19 years, Jon Shugart has followed his passion for technology and entrepreneurship and he has built several multi-million-dollar businesses from scratch along the way. But more important to him than just the revenue is that the they have helped improve the quality of their customers’ lives.

Whether it was through marketing automation or the use of big data, Mr. Shugart has tackled problems that very few others have gone after solving. However, that is what gets him excited the most, and the more difficult the challenge, the more ready he is to jump in with both feet and get to work to solve it.

Luke Sample is one of the most well-known and well-respected figures in the entrepreneurial and software startup space. He has over 20 years of experience in nearly all aspects and areas of online entrepreneurship.

It takes a lot of talent, passion, creativity, dedication, discipline, hard work, and leadership skills to build several multi-million-dollar businesses from scratch and to reach the top of several fields in a single lifetime. Luke Sample has been able to do that and much more in his early life.

Luke’s success in so many diverse areas comes from a combination of his insatiable desire for excellence coupled with an unrivalled ability to never give up until the goal is reached.

One doesn’t get featured on the front page of the Wall Street Journal as a 23 year old entrepreneur, or generate more than $50 million in online sales without putting everything together successfully.

Whether it’s his early successes in life as an athlete, a student, an artist, a musician and band founder, or in later years a successful founder and builder of companies, Luke is always striving for that next big goal or achievement in life.

But what is most unique about Luke and the thing he is most proud of is his ability to create success in other people.  Creating success for himself is one thing, but the ability to help someone else achieve their own dreams and reach their own goals with his help is what really drives Luke now.  He has been able to help thousands of people quit their jobs, make hundreds of thousands of dollars, and in several cases millions of dollars.

Creating several millionaires from humble beginnings or scratch is no small task yet it’s one Luke has been able to do over and over again, most recently with his partner Jon Shugart and the Book Profits training program.

We are very excited to be joined with Jon Shugart and Luke Sample to talk to our audience about Book Profits.

And so you settled on textbooks as the initial product that didn’t have a lot of spoilage, didn’t decrease in value significantly in a short period of time. How did you end up choosing textbooks?

The initial way we got into textbooks was kind of interesting. My wife is an instructor at the local university Criminal Justice Department and came on one day and said, “Hey, I made a couple of 100 extra dollars today.” And I said, “Oh really? How did that work?” And she said, “Well, I had some guys that came around, knocking on our doors, offering us money for our textbooks.”

And as an instructor you usually get these samples sent to you from different publishers and all these textbooks you get for free or old, and you just end up with a lot of textbooks that you likely want to get rid of as an instructor. And so they were coming around, paying the instructors and the professors for their old textbooks.

And so I said, “Well, wait a minute, they paid you how much?” She went like, “Well let me show you something.” So I pulled up Amazon and I said, “All right, let’s sport off some of these books that you sold.” And so we were looking and after the first three, we were already over $200 that she could have made easily by just posting them to Amazon for sale, or even sending them in to Amazon through the FBA program fulfilled by Amazon program.

And by the time we added this up there was well over $1,000 worth of books. And so I said, “How about we make sure that you guys don’t lose money anymore in your department and just bring the books home, I’ll show you how to post them on Amazon. We’ll do it for your department. It’ll be a much better thing. You guys can use those funds for the department or for yourself, or however you want to do it.”

So we did that and it worked very well and the books sold. And in the process of some of the research on some of those textbooks, I was browsing Amazon and noticed that one of the books said, “Trade yours in for…” And I think it was $90 or something like that. And I was like, “Hmm, traded in. That’s interesting.”

So it said about $90, and then I looked over to the price of that book and I could buy the book for 45. And so I said, “Well, wait a minute. I can buy the book for 45, but they’re offering $90 for the trade-in. This is interesting. How is this working?”

So there’s a trade-in as far as credit on Amazon, it wasn’t cash.

Well, it is cash basically. What happens is they give you an Amazon gift card as credit, right? And then of course there are several ways to turn that into cash. However, what I also noticed at the same time was not only was Amazon offering trade-in, but there were several other websites offering trade-in. Some of them offering more than Amazon was.

So I said, “Okay, wow. There’s an opportunity here.” And by the way, Amazon is the only one that pays you in credit, which again is easily converted to cash. But then the third, we call them third parties, these non-Amazon book dealers, were all offering about the same or even more and they all pay in cash, PayPal.

So I said, “This is wild. Why would they be… I don’t understand this. Why can I buy this book for 45 and immediately turn it around for 90? Why aren’t they doing this? What’s going on?” And come to find out really what’s happening is, Amazon and these other book dealers are offering a specific trade-in price to buy the books at and beef up their inventory.

Amazon actually already has a lot of these books sold to other buyers on the backend. So they might offer you 90, but they’ve already got it sold for 100, for example. But then I realized, “Oh, this price at $45 isn’t Amazon selling the book. These are people just like us, that we’ve been posting our books for sale on Amazon, right?” These are people that didn’t know the trade-in program existed probably either, or for whatever reason they’re just not taking advantage of this price discrepancy.

So I ordered a few and it worked, and then we started doing it over and over. I showed Jon, we started to scale this up and it was really kind of an amazing market because we could see right there on the screen by subtracting two simple numbers if the book was going to be profitable or not. We didn’t have to carry any inventory. We knew it was going to be profitable before we ever had to buy a book.

So basically we said, “Oh wow, this one they’re offering 70. We can buy it right here for 40.” We actually claim the trade-in before even buying the book and then we would send the book in and they’d pay us and we would get the difference, $30 in that case. So doing that over and over at scale, we found out that it worked really well.

So we got good at that process, but also started to hone the ability to buy textbooks for resell as well. Because not only can you take advantage of these trade-in opportunities, but then there’s also a lot of opportunity to resell the book yourself. Because I mean, let’s face it if a book dealer, or if Amazon is offering you $90 to trade the book in, they’re going to sell it for more than 90. So why don’t you just be that person that’s selling it for more than 90, so you can get even more margin than that.

It kind of developed into two separate arbitrage systems. One we started doing was the trade arbitrage where we would claim a book and then buy it after we claimed it and send it in and make that guaranteed instant bankable profit, but then also evolved into some of them buying them and actually selling them ourselves and scaling up that side of the business. We really found two fantastic arbitrage opportunities within the textbook market itself just by doing that. That’s how it started.

And can you send the books that you buy to get the trade-in directly from where you bought it to where you are going to trade it in or do you have to take possession of the book and then repackage it and ship it back out?

You do have to take possession, but not you personally. What I mean by that is you can have the book sent to… There are several services out there called prep services and you can actually send the book to them so you don’t ever have to touch a book and that’s what we’ve done.

Basically, let’s say you find a trade-in that’s lopsided, right? They’re offering 90 and you can buy it for $35, you buy the book, but instead of having the book shipped to your home or your office, you ship it to this prep service, usually for between $1 and $2, depending on your volumes and who you’re working with.

The prep service then will receive that book, inspect it, prepare it and send it in for the trade-in credit or for resale, if you’re wanting to resell it either way. So for a dollar or two per book, you can have somebody else handle it completely. You never have to touch, look at, see, or store a book.