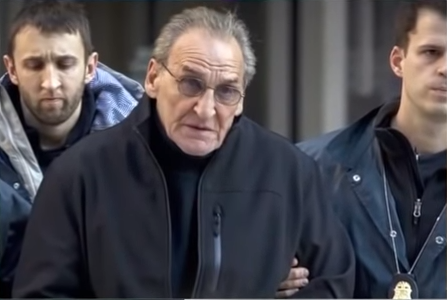 Goodfellas wiseguy Vinny Asaro got a break Friday when he was released from prison over concerns about the coronavirus, the New York Post reports. The thinking: He’s 85 and suffered a stroke just last year. “If Asaro were to contract COVID-19, given his age and current state, it is not unlikely that the consequences would be dire,” said Brooklyn federal Judge Allyne Ross, who had sentenced the Bonanno family capo to eight years for a road-rage arson job in 2017. Asaro initially stood before Ross in 2015 on charges of participating in two crimes—a gangland murder and the 1978 Lufthansa heist depicted in Martin Scorsese’s Goodfellas—but Asaro beat both raps.

Then Asaro was back in Ross’ courtroom on charges of having goons torch the car of a driver who’d cut him off in Queens, the New York Times reported in 2017. “Asaro nursed enough of a grudge from simply being cut off in traffic that he not only followed a member of the public for an extended period, terrorizing him, but also had an associate find out his home address and then ordered the man’s car to be burned to a crisp days later,” said Ross in slapping him with an eight-year sentence, which she called a “death sentence” for the 82-year-old. There’s no evidence of the coronavirus infecting the Missouri prison where Asaro was doing time, but Ross apparently showed him some compassion. (Read more mobsters stories.)