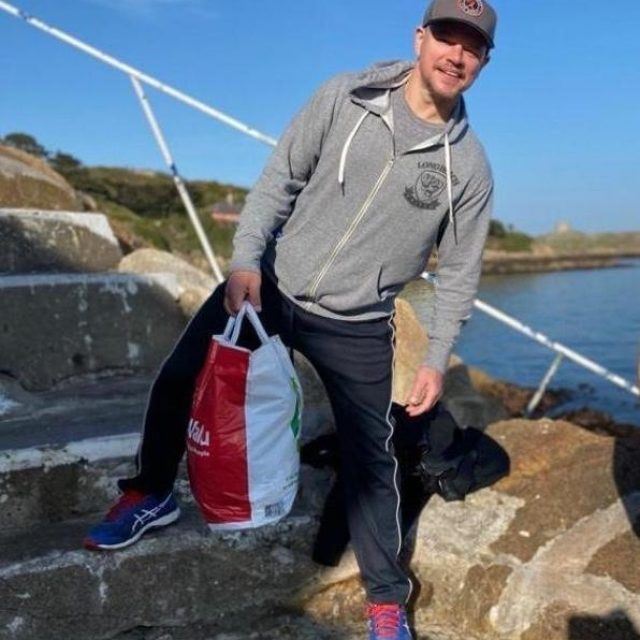 Small town, meet your new celebrity neighbor—and pretend he’s just like anyone else. That sums up a New York Times report on an Irish town’s reaction to Matt Damon, who’s been seen walking and talking around Dalkey while holed up there during the coronavirus shutdown. “I think it’s an Irish thing,” says Denise Deegan, who was shouting “Hello” to her mom on the phone when Damon responded “Hello” on the street. “We don’t want anyone who is a celebrity to think that we are in any way sycophantic.” Similarly, Mary Caviston, owner of Corner Note Cafe, pretended Damon was just another customer until asking him for a photo. She closed her business for the pandemic only hours later. “It was a high note to go out on,” she says.

Damon, who’s there to shoot Ridley Scott’s The Last Duel, became popular when a photo circulated of him shopping with a SuperValu bag—which “has been a beacon in the storm, a spring in the desert, an apparition at a grotto for a country in ecstasies of sublime relatability,” says the Independent. Residents are even protecting him from the press on Facebook, writing “Leave Him Be!” But is he really one of them? Dublin Live reports that wanted posters are popping up around town, offering nearly $1,100 in concert tickets to anyone who connects Damon with a Dublin radio station: “If you spot Matt approach with caution as he is lethal with a newspaper and a can of hairspray, has a smile that can take an eye out and would much prefer to blow up Nazis than spend a weekend stuck at home on the farm with the folks,” the posters say.