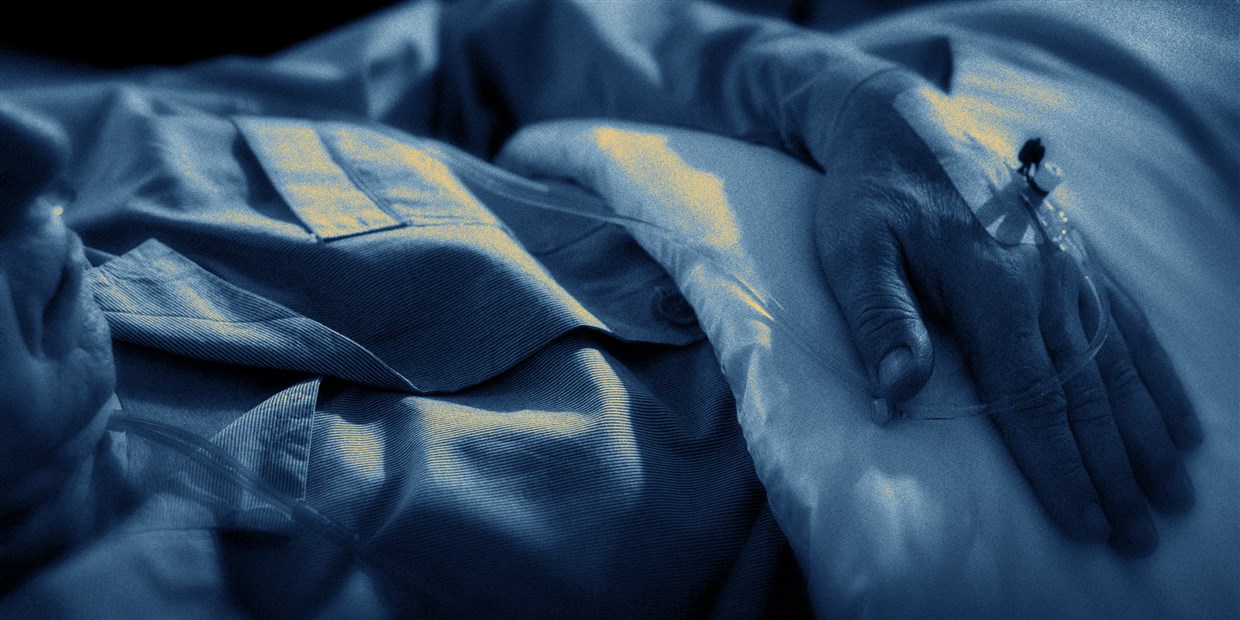 The coronavirus patients began arriving the last week of March, transferred to the Gurwin Jewish Nursing and Rehabilitation Center under a New York state mandate requiring nursing homes to accept those recovering from COVID-19, even if they still might be contagious.

At the time, the Long Island nursing home had only one known resident who had contracted the virus, according to the facility’s president and CEO, Stuart Almer.

A month later, Gurwin is battling an outbreak that’s killed 24 residents — only three of whom were hospital transfers — and one staff member, who worked in housekeeping, Almer said. And the nursing home is still mandated to take in recovering hospital patients known to have the virus, potentially increasing its spread in the facility.

“We can’t say for sure” whether the virus has spread because of the patients transferred under the state mandate, Almer said. “But it’s certainly not helping the situation.” “Nursing homes are working so hard to keep the virus out, and now we’re going to be introducing new COVID-positive patients?” asked David Grabowski, a professor of health policy at Harvard Medical School. Instead, he believes that states should create COVID-only facilities for recovering patients discharged from hospitals.

“The existing places that can really do this safely in terms of staffing and building space to keep them separate are in the minority,” he added.

Do you have a story to share about how the coronavirus is affecting nursing homes? Contact us

When Gurwin staff members told Christina Peredo’s mother about the mandate in late March, her family decided to withdraw her 96-year-old grandfather from the facility, out of fear for his safety, even though he was still on IV antibiotics and recovering from pneumonia unrelated to the virus, she said.

“To make this a mandate without exploring other options, what you’re saying is, ‘Sorry, you’ve lived a good life,’” Peredo, 35, a nurse, said. “It’s reckless and careless.”

Full coverage of the coronavirus outbreak

The blowback to these policies prompted California to soften its mandate April 1, saying facilities “can be expected” to receive COVID patients only if they have adequate protective gear and can follow the federal government’s infection control recommendations.

But in New York, the controversy over the mandate has escalated as the virus has battered hospitals and nursing homes alike: The state not only has more coronavirus cases than anywhere in the country, but also the highest number of known long-term care deaths — at least 3,500 — related to the virus, according to the state health department. A broad swath of nursing homes across the state have already accepted COVID-positive hospital patients in compliance with the mandate, and Gov. Andrew Cuomo has openly criticized facilities for opposing it.

“They don’t have a right to object. That is the rule and that is the regulation, and they have to comply with that,” Cuomo, a Democrat, said in a Thursday news conference. “If they can’t do it, we’ll put them in a facility that can do it.”

Nursing homes across the country have struggled to contain the coronavirus’ spread, facing shortages in testing, personal protective equipment and employees, who assist residents with everything from bathing to feeding themselves. Many elderly residents are unable to comply with basic infection control measures like hand-washing or mask-wearing, and suffer from underlying health conditions that make them more likely to succumb to the virus.

As of this week, the coronavirus has killed nearly 11,000 people in nursing homes in 36 states, according to state health data collected by NBC News. More than half of those deaths occurred in New York and New Jersey.

Early in the pandemic, New York had strict guidelines for when infected patients could be discharged from hospitals: The state required patients to have two negative COVID-19 tests; wait at least seven days since the initial positive test; and be fever-free without medication, according to a March 8 advisory.

But as cases rapidly mounted, hospitals became overwhelmed, and recovering patients who didn’t require hospital-level treatment needed somewhere else to go. While patients must be medically stable to be transferred out of a hospital, those heading to a nursing home or other post-acute care facility require rehabilitation and other care they can’t receive at home.

On March 25, New York became the first state to issue a blanket rule prohibiting nursing homes from denying admission or readmission to residents because they are infected with COVID-19, and banned the facilities from testing patients for the disease before they are admitted. (The state had already required all facilities to isolate COVID-positive patients and prohibited staff from moving between treating those who are infected and those who are not.)

“There is an urgent need to expand hospital capacity in New York State to be able to meet the demand for patients with COVID-19 requiring acute care,” the state said in its advisory, which requires “the expedited receipt of residents returning from hospitals.”

Cuomo has defended the policy in the face of rising objections, saying Thursday that facilities that did not follow the rules for managing COVID patients would be investigated by state health officials and the state’s attorney general, which could result in fines or the facility losing its license.

“They have to readmit COVID-positive residents, but only if they have the ability to provide the adequate level of care under Department of Health and CDC guidelines,” Cuomo said, referring to the Centers for Disease Control and Prevention.

Leading industry groups have strongly objected to the mandate, warning it would accelerate the transmission of the virus and put some of the state’s most vulnerable residents at risk.

“We find the New York state advisory to be over-reaching, not consistent with science, unenforceable, and beyond all, not in the least consistent with patient safety principles,” the Society for Post-Acute and Long-Term Care Medicine, which represents medical professionals who work in nursing homes, said in a statement.

The American Health Care Association, which represents long-term care facilities, added: “The bottom line is that nursing homes are not a priority in the public health system and this policy reflects that.”

While Almer “vehemently opposes” the mandate, he said that Gurwin had no choice but to comply. He also wants the nursing facility to do what it can to support local hospitals that need to clear beds.

Since the mandate took effect, recuperating patients across New York state have been discharged to nursing homes in Staten Island, Queens and Long Island, among other hot spots, as well as upstate New York.

Gurwin had originally planned to house the patients arriving from hospitals and any other infected patients in a separate, 40-bed unit with its own entrance, dedicated staff and full protective gear, according to Almer. That’s in line with the CDC’s recommendations for nursing homes to isolate patients known to be infected. The first discharged hospital patients began arriving the last week of March, Almer said, just a few days after the mandate took effect.

But Gurwin’s COVID unit quickly filled to capacity as the virus spread inside the facility, and recovering patients kept arriving from local hospitals, he said.

The nursing home currently has 40 long-term residents known to have the virus, in addition to 18 recovering patients transferred from local hospitals. Fifty staff members have also been confirmed positive, though more than half have since recovered and returned to work, according to Dennine Cook, a spokeswoman for the facility.

The rising number of infected residents means that it is not always possible to separate those who are known to be infected from those who are not. If a person outside the space dedicated to COVID patients becomes infected, his or her entire unit is isolated and treated as if any of the residents could be positive, Almer said. But the virus may still spread within the facility, especially to other residents within the unit.

By early April, a second Gurwin resident in his 90s tested positive for the coronavirus, a little over a week after the first hospital patients were transferred to the facility. He subsequently developed pneumonia related to the virus, according to his daughter, who asked to remain anonymous for fear of retaliation against her father.

“You’re injecting in something so highly contagious,” said the daughter, who opposes the New York mandate and fears her father may have become infected because of it. Since he became ill, the virus has continued to spread, she added: “His roommate is now COVID-positive. I feel for sure my father contaminated him.”

State health officials say the March 25 guidance was intended to avoid discrimination against infected patients and to help hospitals manage their capacity.

“The policy is to ensure people are not being held in hospitals solely due to their COVID status,” Jill Montag, a state health department spokeswoman, said. “This is important for hospital surge management and their ability to maintain space for patients with acute needs.​”

Northwell, the state’s largest health care provider, said its hospitals have had “tremendous” issues with bed space, and that many COVID patients require care in skilled nursing facilities.

Northwell’s hospitals have sent 788 COVID-positive patients to 118 post-acute facilities since early March, including Gurwin, Carney said. Those include nursing homes that focus on long-term care, as well as facilities that offer short-term rehabilitation; many offer both.

But facilities have been reluctant to accept patients because of the state’s requirements for all infected residents to be isolated in their own rooms with closed doors, among other guidelines, Carney said: “Many community facilities (from my discussions) were and are slow to accept cases because it was/is hard to accept cases while meeting these isolation requirements.”

Both industry leaders and public health experts like Grabowski are urging states to come up with alternatives to avoid exposing at-risk nursing home residents even further.

“Sending hospitalized patients who are likely harboring the virus to nursing homes that do not have the appropriate units, equipment and staff to accept COVID-19 patients is a recipe for disaster,” the American Health Care Association said in a statement. “Governors and public health officials should be working with nursing homes to create as many segregated units as possible right now.”

Grabowski suggested that officials could step in to help construct post-acute care facilities for discharged hospital patients, much as the Army Corps of Engineers has constructed temporary hospitals. “Let’s invest in those, and let’s not force nursing homes to do this,” he said.

In Boston, for example, state and local officials teamed up with health care providers to create a temporary 1,000-bed facility in a convention center for recovering patients who don’t need hospital-level care. In Minnesota, providers created a 50-bed facility for recovering coronavirus patients who might otherwise be sent to nursing homes. New Jersey has partnered with three health care facilities with specially designated beds for recovering COVID patients from hospitals “who are awaiting nursing home placement,” the state health department said in a statement.

In New York, however, no plans to create COVID-only nursing homes or rehab facilities are in the works, Montag, the health department spokeswoman, said. “At this point, we do not have plans to relocate nursing home residents.”

And despite signs that coronavirus infections and deaths have peaked in New York City, the influx of patients from local hospitals hasn’t let up, Almer said.

“We’re seeing the surge from the last few weeks,” he said. “If anything, it just continues to intensify.”

Originally Published on MSNBC
Previous Article
San Francisco had the 1918 flu under control. And then it lifted the restrictions.
Next Article
Flogging Sentences to End