Biden is forced to find new ways to connect, one year into the campaign

Biden is forced to find new ways to connect, one year into the campaign 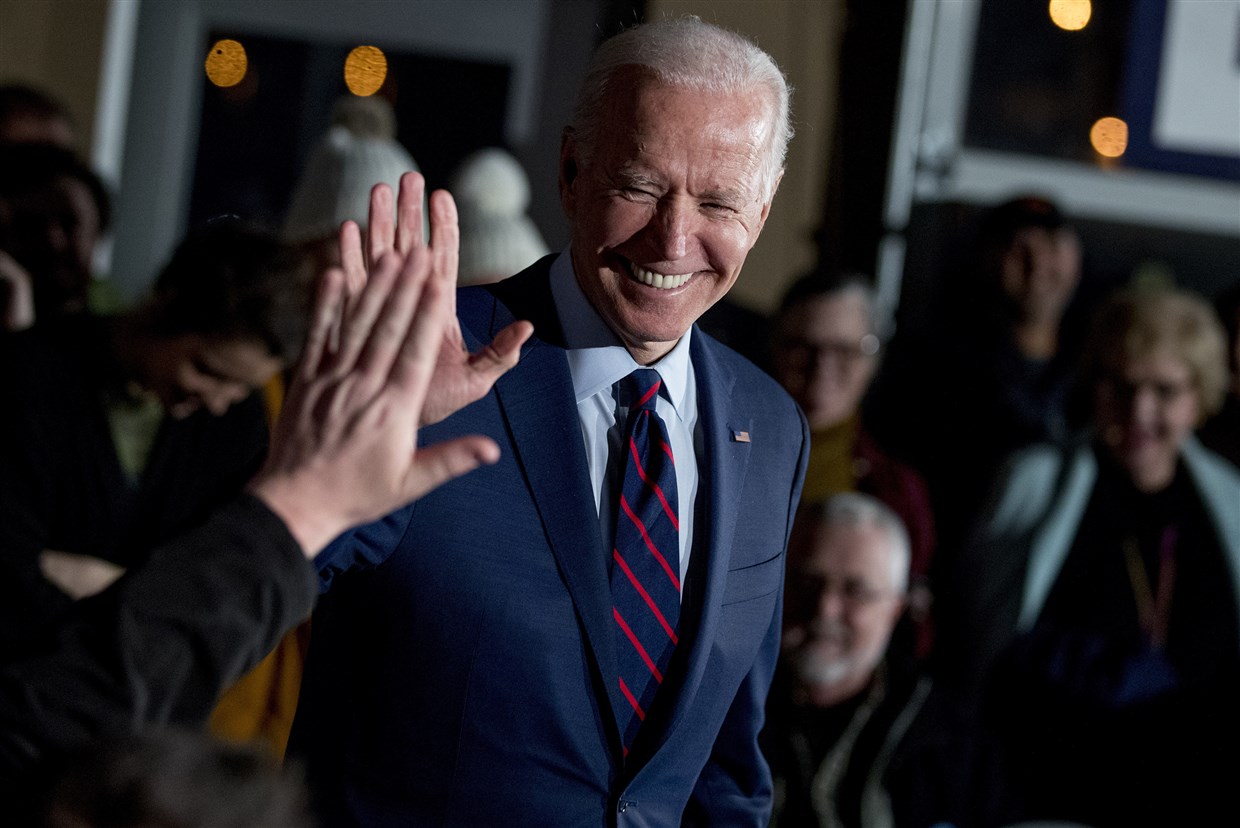 WASHINGTON — Joe Biden has talked to thousands of voters on hundreds of campaign rope lines during his career, but never from nearly 3,000 miles away.

“How are you, man? I can see you clearly,” Biden said to Jason Kueper, a San Francisco resident and one of a half-dozen participants in the campaign’s first “virtual” rope line held this month.

“They unmuted it and then it was just, I mean, my heart was dropping. I couldn’t believe it. Here I am in my living room of all places talking to Joe Biden over Zoom and it was like there was no one else around. It was just me and him,” Kueper recalled.

When Biden launched his campaign one year ago this weekend, his team believed his ability to connect with voters one-on-one would pay off even as many of his rivals could draw bigger crowds and reach more voters through paid television advertisements.

Now that’s he is the apparent Democratic nominee, the COVID-19 pandemic has forced his campaign to get creative even as he’s largely confined to his basement in Delaware. Empathy, Biden aides often say, is his “superpower,” strengthened over decades enduring his own personal tragedies and loss. It’s a quality that has drawn praise even from detractors who criticized him as a flawed and often uninspiring candidate but still admire his ability to forge a human connection, especially now as the pandemic upends American life.

Kueper, a flight attendant who volunteered for Biden as a precinct captain in Iowa, got a text earlier this month from a campaign staffer that he thought would be a plea for donations. But instead, he said, he was “blown away” when the staffer told him he could speak to the candidate directly.

Kueper said Biden had immediately asked about his fiance, Matthew, a nurse assisting coronavirus patients, and whether Matthew’s hospital had enough personal protective equipment for its workers. By the end of their conversation, Kueper said he felt like he was talking to a friend.

“He gets how much pain the country is in and how much we’re all hurting, that we’re all sick of what’s going on right now in the White House, that we want to be united, and he makes me feel that he’s going to make that his priority, and that’s so unbelievably refreshing after what we see with the president every single day,” Kueper said.

“This election is not about turnout, it’s about persuasion,” John Weaver, a Republican strategist who helped found the anti-Trump Lincoln Project, told NBC News. He said Biden’s relatability could sway some Republican voters in November. “I think it’s a characteristic that is going to be not only necessary, but appealing to beyond the Democratic base.”

To mark the anniversary of its launch, Biden’s campaign has organized what it calls a “SOUL of the Nation Saturday,” with events across the country focused on showing support for first responders and frontline workers, and promoting communities that are rallying amid the pandemic.

Biden is also finding more targeted venues to offer comfort, often just by picking up his phone and calling people he’s met through the decades of his political career to check in on them.

Most recently, Biden said he called Sen. Elizabeth Warren, D-Mass., who announced Thursday that her oldest brother had died from the coronavirus earlier in the week.

On the campaign trail, Biden would often stay for hours snapping selfies and hearing personal stories from supporters. With the pandemic now keeping him at home, he is reaching out to supporters like Kueper to hear about how their lives are being affected.

Ken Washington, the recording secretary of the Philadelphia AFL-CIO, said Biden called him when he heard that one of Washington’s family members had died.

Washington mentioned the call during the AFL-CIO’s virtual convention earlier this month, when he thanked Biden for calming down his young family members, who had been inconsolable over the loss.

“You had them crying because the thing of it is, you were able to share with them the feelings that they were having because you went through basically the same thing,” Washington said. “And that’s why I believe that he’s our best choice to beat Trump because he understands what we go through every day.”

In a television interview this week, Biden’s voice cracked when discussing parents who had lost children from the coronavirus — a grief he has experienced twice, when he lost his son Beau to brain cancer in 2015 and his first wife and baby daughter in a car crash in 1972.

Download the NBC News app for breaking news and politics

“Some have lost their son, daughter, husband, wife, their mom or their dad, and I just know that, when in a different circumstance, I was going through similar losses,” he said.

Biden’s emphasis on a personal touch has long led him to place a premium on comforting anyone who approaches him about just losing their child to cancer, as he did, or the uncertainty of possibly losing a job and shame for failing to provide for their family.

In interviews, Biden says he’s alarmed that Trump uses his nightly press briefings to boast about his own handling of the crisis rather than consoling the country from the most powerful lectern in the world.

“Have we heard him offer anything that approaches a sincere expression of empathy for the people that are hurting? Have we seen any sign that he grasped just how hard it will be for people to recover from this, not just economically, but physically and emotionally as well?” Biden asked on MSNBC’s “Morning Joe” last week. Biden: Trump presenting a ‘false choice’ between health and economy

Biden told campaign aides at the onset of the pandemic to prioritize engaging those touched by the COVID-19 crisis so to understand what they’re going through and better inform future policy proposals. To fulfill that directive, the campaign has held numerous virtual town halls with frontline workers, texted supporters across the country to simply check in, and will hold future “virtual rope lines” for Biden to comfort those in the way he knows best.

Sen. Amy Klobuchar, D-Minn., recalled on Biden’s podcast Monday how he insisted on calling her friend when he heard that her friend’s husband had died, a man he had never met.

“You gave her your personal number because you said you knew what it was like to lose a spouse. And I think that story to me is all about you, but it’s also about what we need in this country right now,” Klobuchar said. “We also need a president that’s able to lead and to, even if it’s virtually, hold people’s hands and we’re not seeing that right now in the White House.”

That muscle memory of willingly giving out his personal number to countless people this past year on the rope line led Biden to almost give it on national television late last month when discussing how much he wanted to help those suffering from the coronavirus pandemic.

“The human connection is so, so profoundly important. And when you don’t have it, you got to get help,” he said during a CNN interview in late March. “But those who have been through that, you can contact my campaign. I’m happy to try to talk to you. Not that I’m an expert, but just having been there, I’m so sorry for you.”

Originally Published on MSNBC
Previous Article
Get down from there! Parents struggle to keep cooped-up kids out of the ER
Next Article
Elective surgeries set to resume, with complications and concerns