US Confirms First Cases of Coronavirus in Pets

US Confirms First Cases of Coronavirus in Pets 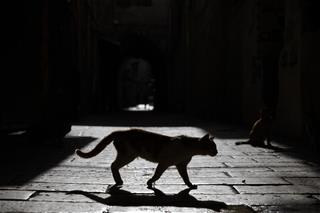 Two pet cats in New York state have tested positive for the coronavirus, marking the first confirmed cases in companion animals in the US, federal officials said Wednesday. The cats, which had mild respiratory illnesses and are expected to recover, are thought to have contracted the virus from people in their households or neighborhoods, the Department of Agriculture and the federal Centers for Disease Control and Prevention said. The finding, which comes after positive tests in seven tigers and lions at the Bronx Zoo, adds to a small number of confirmed cases of the virus in animals worldwide, the AP reports. US authorities say that while it appears some animals can get the virus from people, there’s no indication the animals are transmitting it to human beings.

“We don’t want people to panic. We don’t want people to be afraid of pets” or to rush to test them en masse, says Dr. Casey Barton Behravesh, a CDC official who works on human-animal health connections. “There’s no evidence that pets are playing a role in spreading this disease to people.” Still, the CDC is recommending that people prevent their pets from interacting with people or animals outside their homes—by keeping cats indoors and dogs out of dog parks, for instance. Coronavirus testing for pets isn’t recommended unless an animal has been exposed to a person with COVID-19 and the animal has symptoms of the disease—and tests have ruled out more common possible causes, says Dr. Jane Rooney of the USDA. Veterinarians who think testing is warranted are supposed to contact state officials to decide.