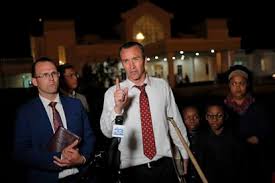 There is now a warrant out for the arrest of the Louisiana pastor who’s been making headlines for continuing to hold church services in defiance of state orders banning large gatherings amid the coronavirus pandemic. Tony Spell had already been hit with misdemeanor charges related to the services at Central Louisiana’s Life Tabernacle Church, but he now stands accused of aggravated assault with a deadly weapon, WAFB reports. The new allegation cited in the arrest warrant claims Spell reversed a church bus in the direction of someone who was protesting outside the church on Sunday, stopping just short of the man. A second arrest warrant was issued for the driver of a white truck that appeared to swerve off the road and attempt to hit another protester standing there.

“At first I thought he [Spell] was just turning around his bus and was going to pull away, but he just kept coming in reverse,” the protester says. “I could see him driving the bus. He was honking his horn loudly at me and making gestures suggesting he was yelling while he was driving. It didn’t seem real until it was physically in my face with a bus.” But Spell’s attorney tells NBC News, “A fair viewing of the video will prove that Spell did not attempt to run over the protester, and the protester did not feel threatened, as he never moved when the bus came near.” Meanwhile, a coroner’s report says an elderly member of Life Tabernacle Church died of COVID-19 on April 13, but Spell says that is “a lie” and the man died of other causes. Spell is also asking church members to donate their stimulus money to the church, CNN reports. (The church has in its corner an infamous adviser.)

Previous Article
US Confirms First Cases of Coronavirus in Pets
Next Article
One Inmate Not Getting Released: R. Kelly