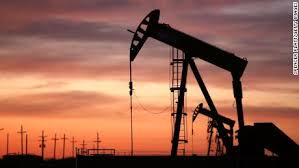 A lot of people are buying USO to bet on a rebound in oil price. That’s the wrong vehicle to do it in.

USO will suffer greatly in the near term due to the super contango we are seeing in the market.

Cushing inventory as of April 14 already is sitting at ~60 million barrels. It will be filled in three to four weeks.

Once storage hits tanktop in Cushing, June WTI is likely to blowout vs. July, making USO holders very vulnerable to a sell-off. Combine this with the fact that USO holds 20% of the June WTI contract positions and the sell-off could be intensified on May 5 when the roll begins.

There are far more alternatives to bet on a rise in oil price, but none of them are perfect.

Looking for a helping hand in the market? Members of HFI Research get exclusive ideas and guidance to navigate any climate. Get started today »

Welcome to the USO edition of Oil Markets Daily!

This has garnered a lot of attention over the past week, so we thought it’s an important topic for an oil market fundamentals report. If you don’t want to read the explanation below, the punchline is that USO is not the vehicle to bet on higher oil prices, at least not in the current market environment.

USO suffers/benefits from something called the roll yield.

First, you need to understand what a futures curve is. 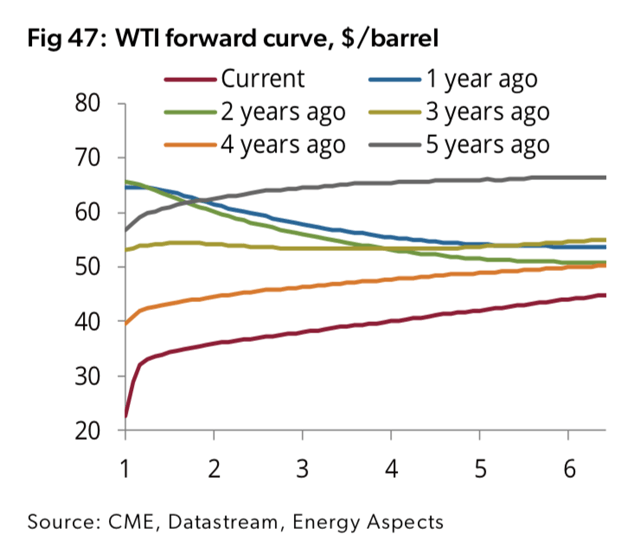 In the picture above, you can see the WTI forward curve at the moment, one year ago and up to five years ago. What you will notice is that the WTI curve one and two years ago was downward sloping. This is what you call ackwardation. In a backwardation market, supply is less than demand, causing the prompt or current prices to be higher than future prices.

In a contango market, which is what the current curve is showing (shaping upward), supply is greater than demand, causing prompt prices to be lower than future prices. 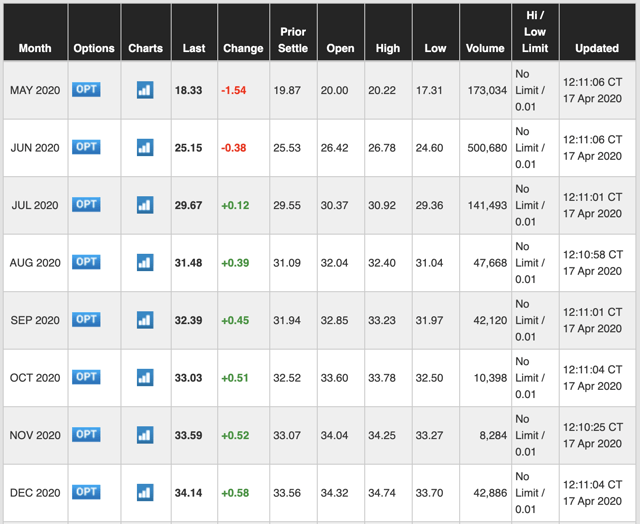 Now the issue you run into with USO is that betting on oil price rising or falling is an imperfect science. Because of the nature of futures trading, there are contract expirations that the speculators have to contend with. There’s no continuous oil instrument you can keep betting on to see whether prices rise or not (more on this later).

As for USO, on the seventh of every month and for the next four business trading days, it will start selling the current prompt month and buy into the next month. You can see the anticipated roll period on the USO sponsor website. 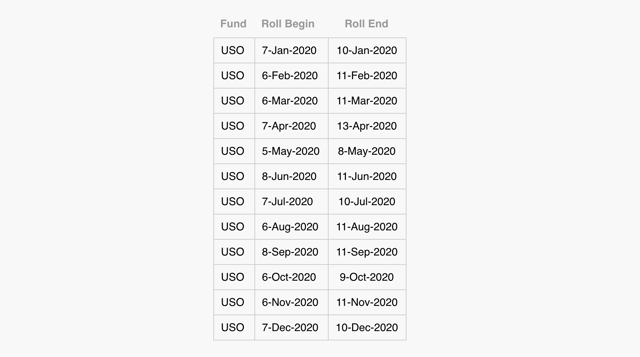 This is where the problem of a super contango market kicks in. USO already is in June contracts, but with May contracts currently trading at $18.20/bbl, there’s a risk that as physical oil trading starts in May, June contracts could fall below $20/bbl (like what’s happening to May).

The reason is that WTI contracts are settled in Cushing, where inventories are promptly starting to get full. 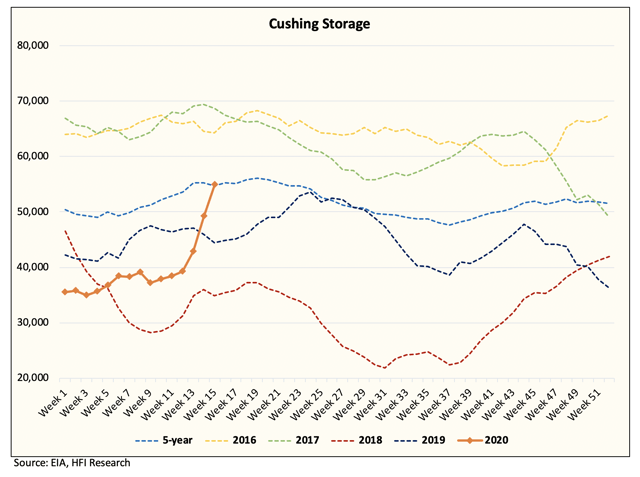 This means that if nothing changes (no more additional shut-ins take place), in the span of three to four weeks, Cushing inventory will hit tanktop. This mechanism will force widespread oil production shut-ins. At the moment, Permian producers are only curtailing ~30% of production, but that will likely increase to 75% if not 100% by end of May. That’s because producers that had access to pipelines were hoping to store the oil in Cushing so that they can be sold for a later date (contango market).

Combine this with the fact that USO now owns ~20% of the outstanding June WTI contracts, and we can quickly see how June WTI prices could crater as we get closer and closer to May 5 (the date where USO starts to roll).

So rather than the retail/consensus view of buying USO, we are actually looking at shorting USO. This is not a riskless trade, however, and we will walk through the logic of this trade.

For starters, we know shut-ins are happening, and we would actually want to see Cushing hit tanktop, forcing a widespread shut-in across the Permian and Mid-Con producers. But because of the near-term demand destruction and the reduction in refinery throughput, demand near term won’t rebound (not within the next month). And even if states start to reopen, refineries will have to work through the bloated product storage first before buying crude again. So other than the risk of a near-term short squeeze, we don’t have to worry too much about a demand spike risk.

Now if we assume that Cushing continues to build and that the current May contracts trading at $18/bbl are more reflective of the actual physical market, then June contracts will likely drop as we get closer to May contract expiration. The price difference today is 6.91/bbl.

If you put that into percentage terms, the risk for those holding USO today is ~27.6%. Not only will USO holders suffer a potential 27% loss from June contracts moving to May contract prices, but then there’s also the issue of June rolling into July on May 5. And with July trading at $29.68/bbl, USO holders will suffer an additional $4.60/bbl or ~15.5% roll cost.

If you want us to put it in layman terms – you are getting a really bad deal being long USO, but you might make more by betting against USO.

Alternatives but far from perfect

There are alternatives like energy stocks and MLPs that investors can bet on higher oil prices. Heck, investors who want to bet on oil prices themselves can open a futures trading account and by oil futures far out on the curve.

None of these alternatives are perfect, but they definitely beat out the cost of owning USO today.