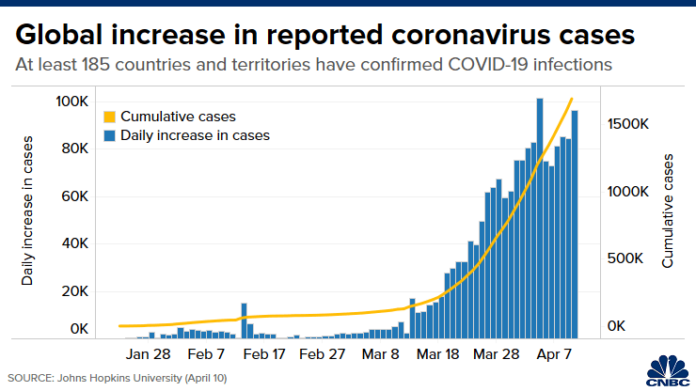 This is a live blog. Please check back for updates.

The data above was compiled by Johns Hopkins University as of 7:10 a.m. Beijing time.

All times below are in Beijing time.

China’s National Health Commission (NHC) said there were 46 new confirmed cases of Covid-19, of which 42 were attributed to travelers coming from overseas. That brings mainland China’s total cases to 81,953, the NHC said.

None of the new cases were in Hubei province, where the coronavirus first emerged, the data showed.

There were three additional deaths in China — all of them in Hubei, taking the country’s total fatalities to 3,339, according to the NHC.

Separately, there were 34 new asymptomatic cases, where people tested positive for the virus but did not show any symptoms. That brings its number of asymptomatic cases currently under medical observation to 1,092, the NHC said. — Yen Nee Lee

8:40 am: Argentina extends lockdown for big cities through April 26

Fernandez said in a televised address that the measures, which were implemented on March 20, have helped to control the rate of new infections, according to the report.

Argentina has reported 1,975 coronavirus cases since the outbreak, according to data compiled by Johns Hopkins University. — Yen Nee Lee

Mexico on Friday reported 403 new cases of Covid-19, bring the country’s total cases to 3,844 since the outbreak, reported Reuters, citing the health ministry.

The country has reported 233 deaths so far, the report said. — Yen Nee Lee

8:03 am: US Treasury says larger airlines need to compensate taxpayers

The largest airlines in the U.S. will have to compensate taxpayers for billions in payroll grants to weather coronavirus, the Treasury Department said Friday, leaving the door open to an aid structure that sparked criticism from labor unions, some lawmakers and industry members.

The Treasury Department has received more than 230 applications from air carriers for payroll grants as the virus and harsh measures to stop it drive down air travel demand to the lowest level in decades. Last week, United, Delta, JetBlue, Spirit and others said they applied for the aid. — Leslie Josephs

Malaysia extended restrictions on movement and travel by another two weeks until April 28 to stem the spread of the coronavirus, Prime Minister Muhyiddin Yassin announced on Friday.

The measures, which involve shutting schools and non-essential businesses, were set to end on April 14.

Malaysia has reported the highest number of cases in Southeast Asia. The country has confirmed 4,346 coronavirus infections and 70 deaths, according to its health ministry. — Yen Nee Lee

Singapore reported 198 additional cases of Covid-19, taking its tally to 2,108 with six deaths as of Friday noon, according to the country’s Ministry of Health.

All times below are in Eastern time.

The economy is already in what will be a short, deep recession and even with a spike in unemployment, consumers are expected to continue to spend, according to a National Association for Business Economics survey.

The 45 economists surveyed by NABE expect the economy to shrink by a 26.5% rate in the second quarter, after a 2.4% decline in GDP in the first quarter. In the second half, they expect growth to turn positive, with an increase of 2% in the third quarter and 5.8% in the fourth quarter.

“NABE Outlook Survey panelists believe that the U.S. economy is already in recession and will remain in a contractionary state for the first half of 2020, as the COVID-19 pandemic severely restricts economic activity,” said NABE President Constance Hunter, CBE, chief economist, KPMG. —Patti Domm

President Donald Trump said on Friday that he will not reopen the economy “until we know this country is going to be healthy.”

The U.S. Department of Health and Human Services reportedly projected that lifting stay-at-home orders, school closures and social distancing after just 30 days would lead to an infection spike this summer, according to documents first reported by The New York Times.

When asked whether Trump had seen federal projections that the coronavirus could resurge if the 30-day shelter-in-place orders were lifted, he said he had not seen the projections.

“We’re looking at a date, we hope we’ll be able to fulfill a certain date, but we’re not doing anything until we know this country is going to be healthy,” Trump said during a White House press briefing. “We don’t want to go back and start doing it over again, even though it would be in a smaller scale.” —Noah Higgins-Dunn