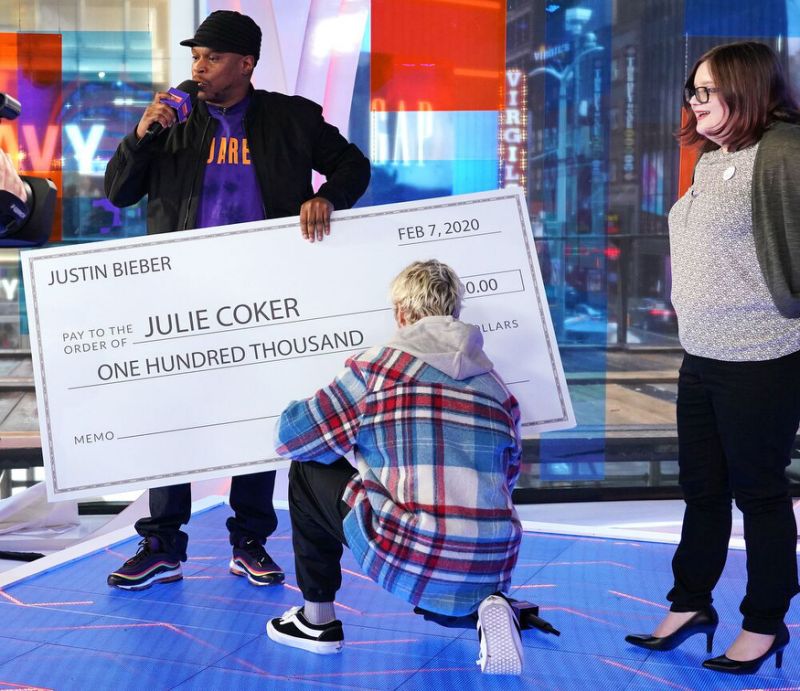 Just hours after the singer released the music video for his latest single “Intentions” — featuring women from Los Angeles’ Alexandria House — Bieber made another act of kindness for a superfan during MTV’s Fresh Out Live.

On Friday, the 25-year-old surprised college student Julie Coker, 22, and left speechless after presenting her with a $100,000 check to use toward her work as a mental health activist.

According to Billboard, Coker is the president of Active Minds at Stockton University, a nonprofit organization that advocates for mental health awareness.

“I work for mental health now because of my own mental-health struggles in the past,” Coker, who was recently diagnosed with depression, told the New York Post. “And it’s important for us to talk about mental health because more than 50 percent of us will have a mental health challenge in our lifetime.”

Coker — whose first concert was a Bieber show and has always been a huge fan  — was originally told she was coming to the MTV show to tape a promotional video for Active Minds.

“He was wonderful. He’s so sweet and kind,” she told Billboard. “I said, ‘Congratulations,’ because he got married to Hailey, and he asked me about my mental health story, and I told him that.”

Coker added that she plans to use the money toward grad school at Monmouth University as well as for donations to the Active Minds organization.

Bieber’s philanthropic act comes shortly after premiering his “Intentions” music video which features him and rapper Quavo — who Bieber worked with back in 2017 on the DJ Khaled song “I’m the One” along with Chance the Rapper and Lil Wayne — making dreams come true for three struggling women.

The music video begins by introducing Bahri, who was born in Saudi Arabia and hopes to be the first from her family to graduate from college; Marcy, who was raised in foster care, escaped an abusive relationship, and hopes to help foster youth find the resources they need; and Angela, who has experienced homelessness and even sings her own verse in the music video.

Bieber gifts Bahri with a new car so she won’t have to worry about getting to class, Marcy’s family with backpacks full of supplies, and Angela with studio time so she can spread awareness about homelessness in an artistic way.