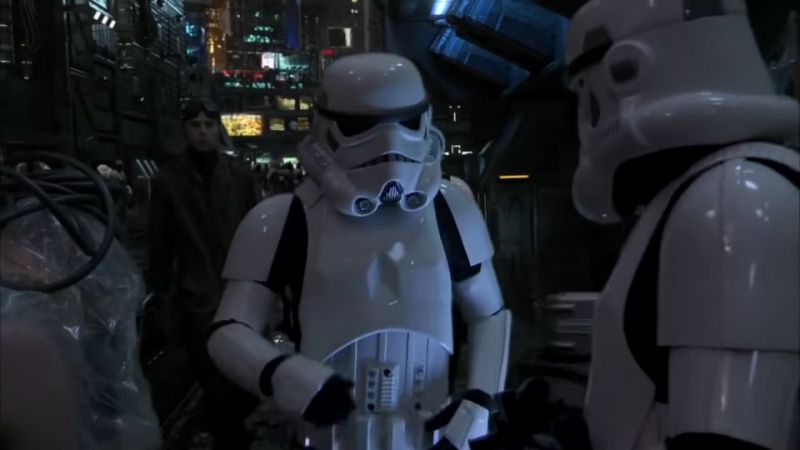 Leaked footage, seemingly from Star Wars: Underworld, has emerged for the first time. The show, which was placed on indefinite hiatus in 2010 due to budget concerns, would have taken place between Revenge of the Sith and A New Hope, with a focus on street-level action in the grimy underworld of Coruscant. The show was reported to be, in the works, before Disney bought ‘Star Wars’.

First, a warning: this is test footage. It’s very rough around the edges and only would have been a general indication of the finished product. It’s an intriguing look, though, at what George Lucas had planned for the franchise post-Episode 3.

Underworld has all the makings of a series that excelled at world-building – something of a Lucas trademark – while introducing a cyberpunk edge only seen in glimpses during Attack of the Clones.

The short five-minute scene focuses on a hooded Rebel picking up a device from a merchant while being relentless tracked across Coruscant streets and stores by the Empire. The end – complete with a “To be continued…” indent – sees a cheesy CGI explosion envelop the screen, leaving a trail of Stormtroopers in its wake and the protagonist’s fate still up in the air.

The latter half of the Star Wars leak involves behind-the-scenes footage. One thing is immediately clear: almost the entire thing is on a green screen. There are barely any practical sets in sight. Say what you want about the sequel trilogy, but at least it didn’t rely as heavily on CGI as Lucas did during this period.

Of course, Star Wars: Underworld never saw the light of day. Despite being announced back in 2004, George Lucas revealed in 2010 that the series would be put on hold – Disney bought Lucasfilm just two years later and the project was quietly wound up. Stiill, an intriguing look at what could have been in a galaxy far, far away.