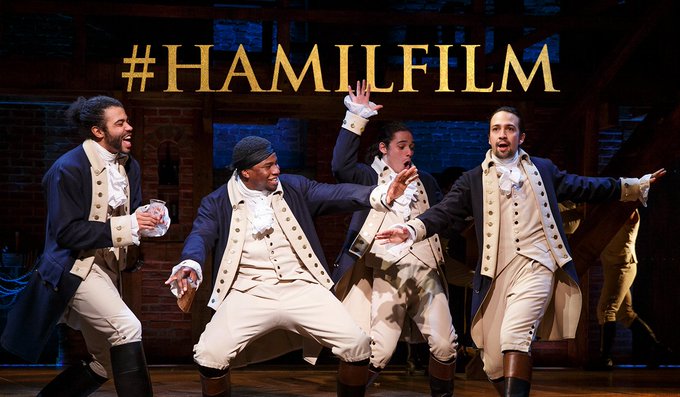 Here’s one less thing to worry about: Lin-Manuel Miranda’s musical blockbuster, Hamilton, is officially coming to movie theaters with the original Broadway cast intact. The Tony-winning actor and lyricist announced on Twitter that Disney will be releasing the film on Oct. 15, 2021, six years after it started its historic run at Times Square’s Richard Rodgers Theatre. According to Deadline, the Mouse House paid $75 million for the rights to release Hamilton, making it one of the largest acquisition deals in movie history.

Unlike past attempts to get the original band back together from beloved Broadway shows — remember that ill-fated Rent film? — the minds behind the Hamilton movie smartly captured the cast in their prime. Director Thomas Kail filmed a pair of performances in 2016 before Miranda and other founding performers like Daveed Diggs, Leslie Odom Jr. and Phillipa Soo exited the show, Those recordings have remained locked in the vault as Hamilton went on to tour America and the world. Miranda, meanwhile, has gone on to star in Mary Poppins Returns, as well as produce a more conventional cinematic adaptation of his first Broadway hit, In the Heights, and make his directorial debut with Netflix’s upcoming Tick, Tick…Boom!

In the interim, bidding rights for the Broadway footage soared as multiple studios competed to add it to their release slates. Disney ultimately won out, and clearly intends to make the most of their investment, turning Hamilton into an experience you won’t want to miss in movie theaters, even if you saw it on stage. To that end, a press release announcing the movie suggests that the 2016 footage will appear in an enhanced version on the big screen. “The film… is a leap forward in the art of ‘live capture,’” the release states. “This movie transports its audience into the world of the Broadway show in a uniquely intimate way. Combining the best elements of live theater and film, the result is a cinematic stage performance that is a wholly new way to experience Hamilton.”

Not surprisingly, Twitter is ready to be in the room where a Hamilton movie happens, even with the year-and-a-half wait. Miranda is also being congratulated for making the show available to those audiences who can afford a night at the movie theater more easily than an evening on Broadway.\

On the other hand, there’s a small, but vocal segment of Twitter who would still love to see Hamilton get the full-fledged movie musical treatment. For the record, Black Panther’s Ryan Coogler has already nominated himself as a potential director, and Corey Hawkins — one of the stars of the In the Heights movie — recently told Build Series that he wouldn’t throw away his shot at being in Hamilton. “I know Lin is obviously, hopefully thinking about that, and if he could be thinking about me with that, that’d be great.”