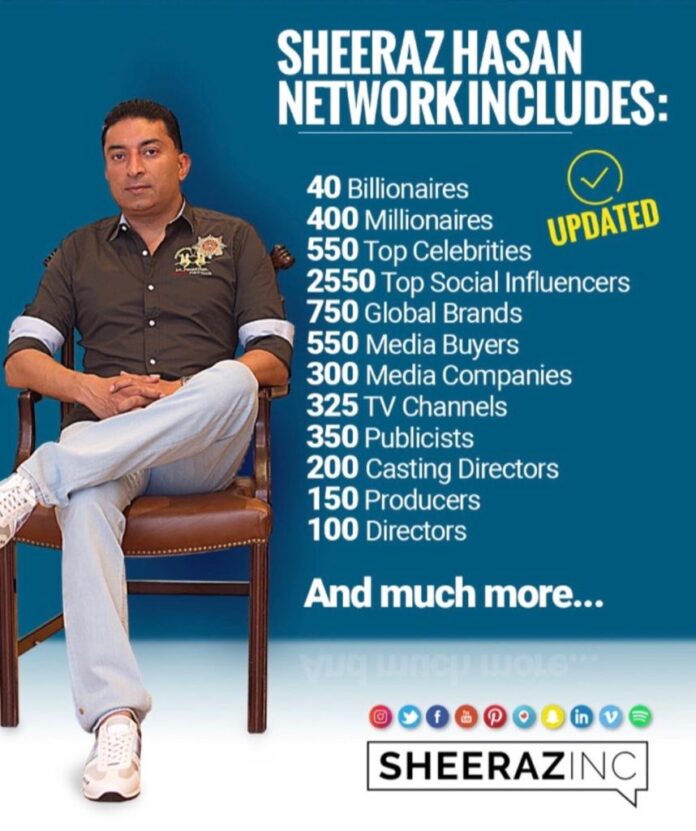 Sheeraz, Inc. is headquartered in Los Angeles, California. Over the past twenty years, they have built up the experience and established connections with the most influential people in Hollywood and Silicon Valley.

Today, through Sheeraz, Inc. and its unprecedented media distribution system, celebrity network and social media influencers, they amplify and support the communication and marketing plans of some of the biggest brands and advertising agencies in the world.

Sheeraz, Inc. is becoming the real-time one-stop shop for all things social media and celebrity and the link between every brand and advertising agency between Hollywood and the world. Their focus is creating social media and celebrity campaigns, executing special projects and driving huge amplification and increasing revenue across Social, Digital, Mobile, Portable and Wearable devices all in Real-Time.

Not many people can boast they have access to 3 billion clicks. Sheeraz now based primarily out of LA and Dubai, he is an entrepreneur, social media expert, and internationally acclaimed real-time amplification and media strategist who has overseen campaigns for some of the most recognized brands, celebrities, and government agencies in the world.

He has a direct network to social media influencers that reach over 3 billion people across all social media networks. Hasan also manages marketing campaigns and works directly with a number of world-famous celebrities including Kim Kardashian, JLO, Ace Family, Lele Pons, Logan, and Jake Paul, Justin Bieber, Selena Gomez, Zendaya, Priyanka Chopra, Paris Hilton, and the Jackson family, among others, generating over $2bn in earned media.