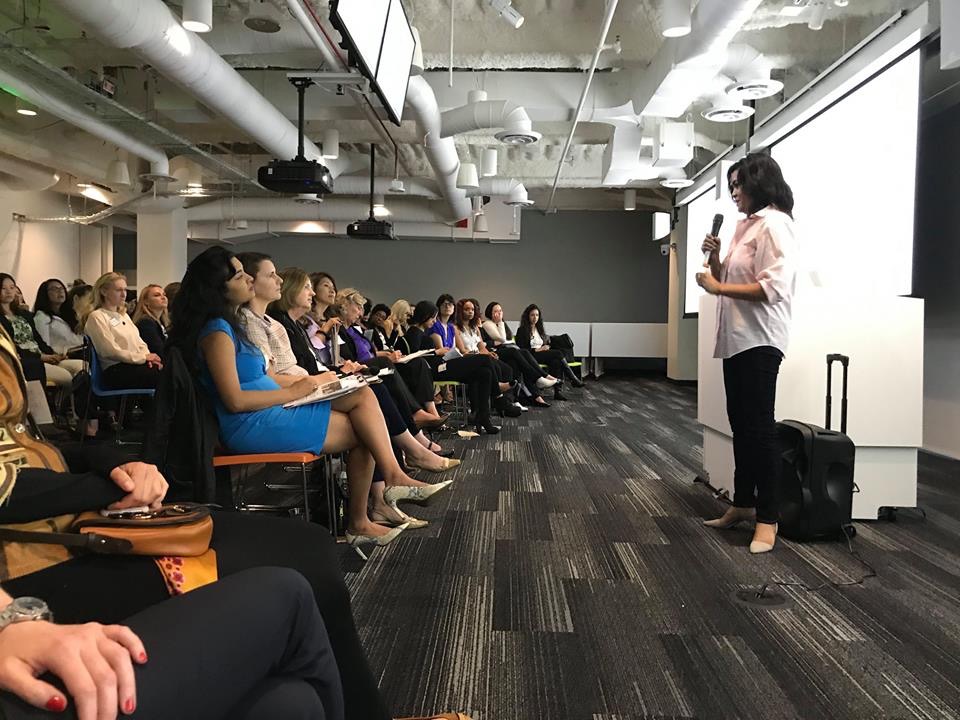 “It just didn’t make sense. “How could I rebalance my portfolio, transfer money, pay multiple bills, and PayPal someone with my mobile phone — and not be able to leave a $5 tip for the housekeeper?”

Elle describes the moment — in a hotel room with no cash — when she decided that her inconvenience was a problem that needed a solution.  “While this was a pain for me, I was concerned for the housekeeper who just lost the opportunity for a tip, for earnings.”

For Elle, not having cash to tip was personal.

Het mother, an elementary teacher from the Philippines, turned to housekeeping to supplement the household income to make ends meet. “I always knew when my mother earned tips because she would take my brother, sister, and me to McDonald’s. Tips mattered”

“For me, the problem wasn’t just about the awkwardness and guilt of not being able to leave a tip. It was my worry that women like my mom were being disproportionately and negatively affected by a cashless society.”

In the hotel industry, women make up 99% of housekeepers. Women also make up nearly 80% of the service industry workforce. Research shows that when women’s incomes rise they spend those extra earnings on the home – their children, clothing, and groceries.

From Educator to Social Entrepreneur

After leaving an academic career as a promising researcher at  Stanford University’s Graduate School of Education, Elle made a major pivot. She looked toward entrepreneurship to figure out how to solve the cashless dilemma.  “As a teacher, I spent my career helping students connect the dots. Connecting mobile payments to tipping was obvious. Someone just needed to do it.”

In 2017, the New York Times published a series of articles about the growing problems with cash-based service tipping — a piece about hotel housekeepers and a second describing tipped seasonal workers as “casualties of a cashless society, In this article, TipGenie was mentioned as a cash-free solution to tipping.

Recently, Elle was recognized by NASDAQ as a disrupter to watch in the service industry. It felt good to have my efforts recognized,” laughing at the term “hot shot.” “Nothing about starting a company for the first time as a nontechnical, Filipino-American female is “hot.” It’s more like having a bucket of ice poured over your head. It’s not sexy. I’ve been wearing yoga pants and for the last few years.”

Elle credits VLAB, a Silicon Valley-based meetup organization that brings together technologists, entrepreneurs, thought leaders and investors. She described her experience serving on the executive committee as “democratizing” and encouraging as a first time founder. “VLAB was about identifying the most promising technologies and bringing a panel of disruptors on stage. I learned to appreciate overnight the power of technology in.changing the world.”

She recalls the profound impact of a fintech event she helped to organize, “Silicon Valley Takes on Wall Street,” which featured Robinhood and Affirm whose co-founders talked passionately about how their products enabled access and financial inclusion. “And that was it. I knew needed to solve the tipping problem.”

Elle credits her experience as a young teacher in East Harken and aspiring scholar at Columbia University’s Teachers for providing her conceptual framework for systems change. “I was whatFortunate to be working in one of the most experimental high schools in the country with people who were determined to bring innovative models of schooling. I know what means to disrupt a system. I didn’t know it then, but we were using design thinking to redesign high schools —  prototyping interdisciplinary curriculum and dismantling structures that were not student-centered.”

Inspired to bring design thinking to education leaders, Elle launched the first partnership between the d.School at Stanford and the Graduate School of Education. She recalls David Kelly, founder of IDEO standing in front of the nation’s top leaders, “I applaud what you’re doing to change schools, There is no institution is more complex than education. The problems that need solving perplexes me still.”

Elle and her team have steadily built a mobile payments platform that enables cashless tipping, real-time feedback, and analytics. In explaining the product’s design, “That part was natural for me. I looked at each player in the ecosystem and identified what would be valuable to them.”

Elle has led TipGenie as a bootstrapped venture and anticipates funding. I’ve become somewhat cynical about traditional fundraising. It’s a huge drain on the emotional reserves describing meetings plagued with self-doubt.”. I think that impact investing and Millennial investors as promising. “There are a lot of solutions that can solve complex problems that are getting lost because of the way that investors define risk, ROI, success.

Describing her doubts are common to “female” — another mountain that I am learning to climb. “Thankfully, I’m working with a wonderful coach, Lynn Kirkham, who is helping me to cast away those doubts.”

Without a doubt, Elle’s value feature strongly in describing TioGenue and her mission to disrupt tipping. “Values are where decision making begins and ends,” explains Elle. “I learned that from advising schools and working with the most visionary principals, like Jeff Gilbert at Hillsdale High School,” who explained: When you have cornerstones that drives your mission, the question isn’t “Should we, but how do we.”

After researching the range of mobile payment options and processors and observing company after company fail. TipGenie has landed on the QR code and is using Stripe to process transactions and payout tips. “The QR code gets a lot of flack, but I’m a huge fan.It’s one the fastest growing forms of payments being adopted in India and China, It’s a matter of time that it will come here. People are just figuring out that all you need to do is point your camera at the QR code to do all kinds of things.”

Elle describes the range of businesses that have approached TipGenie — a world famous hotel, a lake resort, a webcam model, a dog walking business, and NuNanny, a nanny network from South Africa — as signs that a solution is needed, globally. “I’m very excited about our early adopters, like Lhavi.com, a company that is disrupting public transportation through a micro-transit bus system that uses high-efficiency, environmentally friendly vehicles to shuttle tourists on flexible routes and to bypass traffic. President, Nathan Torres, wanted to provide a safe way for drivers to receive tips.

“Everyone has an opinion on tipping,” Elle says, matter of factly. “There are people who think that it perpetuates a practice steeped in racism. Others believe it’s the responsibility of the employer to pay employees a living wage.

Elle’s view is that “81% of Americans see tipping as a reward for good service and a recognition that wages are insufficient. “Everyone is entitled to their views. No one is forcing tipping onto anyone, well, except for those POS terminals.”

When asked about the difference between being an educator and entrepreneur, Elle stops to think. A long pause.

“My values as an educator and skills as a researcher are part of my DNA as a social entrepreneur. My life’s mission was set a long time ago. I’m tagged. The breakthroughs and brutal honest keep me going. She credits her experience in Unbank Ventures, a fintech incubator for pre-seed companies as giving me a path and stage to move TipGenie from prototype to a product on the market.. “Every startup founder needs a Brett who will tell you, “Why are you doing that? Stop that.”

Elle sees an alignment between her empowerment as an entrepreneur and what she hopes TipGenie will do for women. “As an entrepreneur, I’m bolder about saying that TipGenie will change people’s lives.  I’m less patient than I was as a teacher. I’m not afraid to say, “Sorry, I can’t waste time trying to convince you. If you can’t understand the importance and value of what we’re doing, then sorry, I can’t help you.  Thank you, next.”

When asked how she’s managed to get this far without funding, Elle says, “Sheer will.”  She rattles off a long list of names, explaining exactly how they contributed to TipGenie. “It’s a community of advisors, friends, colleagues, family, and  team members who are wishing for my success. They invested their time and faith. They’ve been TipGenie’s investors.

It’s clear after talking with Elle that she has a lot more in mind “TipGenie is more than payments. What you’re seeing is  the tip of an iceberg. We’re going to empower each and every person, financially and professionally, one tip at a time.”