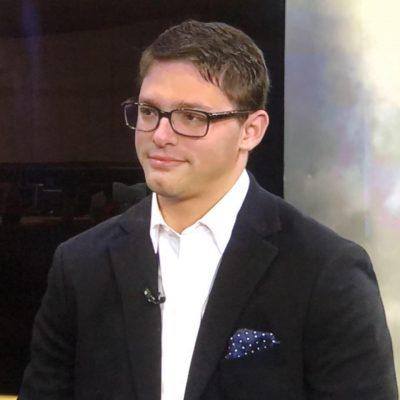 Whether you’re on the red carpet or in a courtroom, you don’t have to be on TV to be a superhero.

Andrew Rossow, a millennial internet attorney and cyberspace law professor in Ohio, has been soaring the skies and courtrooms, fighting for his clients and Hollywood’s right to be themselves online. His national anti-cyberbullying social media movement, #CYBERBYTE, is soaring the skies of the United States.

Rossow, 29, launched #CYBERBYTE shortly after he passed the Bar Exam in 2016 to spread awareness on the dangers of cyberbullying throughout Hollywood and Silicon Valley. This was a direct response to the darkness Hollywood has faced over the years with the #MeToo movement and other scandals that have been brought to light, involving many of our (formerly) respected public figures.

#CYBERBYTE made its first debut at FanX Salt Lake in Utah last year, followed up by its appearance at the 2019 Consumer Electronic Show (CES) in Las Vegas.

Most recently, Rossow was at Wizard World in Cleveland, Ohio, where he was able to re-connect with Smallville’s Michael Rosenbaum, who previously joined the #CYBERBYTE back at FanX in Salt Lake.

Rossow, a big fan of Rosenbaum’s newest project, “Inside of You,” a webcast designed to dive deeper into many of Hollywood’s personalities by talking about personal, life experiences in their career.

We learned Rossow’s inspiration behind #CYBERBYTE came from both his personal experience with bullying as well as his upbringing into a digital age:

“When I was younger, I was always the little guy—smaller than most of my friends. I didn’t understand how to stand up for myself, let alone, distinguish a joke from an insult. I had a lot of bottled up anger that came out at the wrong times, to the wrong people. It wasn’t until I went through law school that I knew what I was supposed to do—to act as a resource for those who couldn’t help themselves, by reaching out to those who run the entertainment space.”

Rossow, who was on social media since the beginning stages of Xanga and MySpace emphasized people’s continuing inability to communicate face-to-face, simply to avoid confrontation.

“When I started high school, it was Xanga and MySpace—there was no Facebook. When Facebook rolled out, it was only available to college students who had a “.edu” email address, and you had to be invited by someone who had one of those emails. I was one of those select few, so I’ve been with Facebook since its first week.”

But, the desire to be appreciated today, according to the attorney, has led to a serious increase in insecurity and self-loathing. “Cyberspace allows us to create or re-create our own identities of who we want to be and how we want to carry that persona out—this leads to bad actors.

“In today’s digital age, we expect a certain level of privacy, yet we buy into technologies that force us to give up those privacy rights. Convenience will always trump privacy. The age of the internet allows us to hide behind our devices, putting up a façade of someone we aren’t. It’s a new digital weapon of sorts.”

According to the attorney, bullying is no longer limited to the classroom. It follows us home in our pockets—from the office, school, or other extracurricular activities. The issue, he said, is standing up to someone you have never actually met.

“I remember growing up, idolizing many of these Hollywood figures, simply because they were famous. Now, I’m at an age now where I appreciate them for who they are and what they stand for. That’s why I came up with the #CYBERBYTE Challenge—it is a means for fans across the world, of all ages, to see those they look up to speaking out on such an important topic that may be relevant to them personally. It’s a means of providing a more direct connection between the public figure and their fan.”

By having one of these actors/actresses/musicians record a short video of themselves to fans about either a personal experience they had with bullying, and tips on how they’ve stood up against it, could literally save someone’s life. I’ve received countless letters from fans across the world thanking me for starting this, because it’s prevented them from that final step of harming themselves.

Thus far, those public figures who have taken a stand with Rossow against cyberbullying, include, but aren’t limited to: